Skip to content
The Israeli Apartheid Week kicked off this week amid a lot of controversy. Some very interesting articles I suggest reading are:
However, in addition to all this, and looking forward, I found that the “Messianic Manifesto for Binationalism” (source) by Udi Aloni is magnificently succinct in presenting a positive, inclusive and emancipatory vision for the issue. I reprint it below, with the addition of the beauty of an olive-tree.

(photo by lorca56, some rights reserved)
Messianic Manifesto for Binationalism, by Udi Aloni

In a moment of elation, I thought to myself: If I had to write a manifesto, cleansed of any apology, filled with passion, unafraid of pathos, and free of ironic parentheses and quotation marks, what I would have written –THE MESSIANIC MANIFESTO FOR BI-NATIONALISM

This communication is written from the Jewish side of the barrier that stands between us and our neighbor, with the hope that, on the day of victory, the wall will be converted into an ascending ladder, and we will breathe together the air of peaks.

We, persons of the great hope, understand that this moment in the history of Israel/Palestine requires a radical change in the consciousness and the thinking structures of the two nations, and so to bring about redemption to the place and its inhabitants. Rather than decry the central historical role of the Jewish as well as the Palestinian liberation movements, we must revitalize the emancipatory forces that had once animated them.

We believe that as long as a solution appears as a weak power, i.e., settlement, and as long as the resistance to solution appears as a strong power, i.e., faith, the political solution is meaningless — because the closer we come to it, the stronger the resistant cells will grow. In this equation for power, the coefficient for resistance will always be higher than the coefficient for solution, ad infinitum. Therefore, the sense of the settlement to come in the near-future is nothing but a sign for the becoming of a disaster.

Filled with faith, we must act toward our aim.

The brand of Zionism which surprisingly appeared in Israel/Palestine at the turn of the twentieth century was not merely a colonial movement as the anti-Zionist claims. Nor was it merely an emancipatory movement as the dogmatic Zionist claims. It was a movement built alongside ideas of Messianic liberation and colonialist ideology. The post-Zionist is the sober Israeli who confronts the inherent conflict in the Zionist position. The post-Zionist acts, or, more precisely, does not act, from a nihilistic stance, or, at least, a skeptical one. He derides the Messianic element that has inspired Zionism from the start, and views the Messianic force as the root of the trouble.

We believe that this is not a time for nihilism. We must suspend doubt, even if it is integral to Truth, or, alternatively, allow doubt the benefit of a truth worth fighting for.

We call on all inhabitants to recognize Zionism as the Law of the Father who was allegedly murdered by the New Israeli, still nurtured by longing, guilt, and admiration for the slain father. Any attempt to resist the Law of the Father as violent Zionist extremism only strengthens him. The repeated slaying of the father only endows him with new life, thereby succumbing to his Law. Therefore, we must not admire his Law, and yet, at the same time, we must try to restrain ourselves from our attempt to destroy it. Rather, we must change our attitude and our perception of it, and by that, transform it into something else. We must strengthen its Eros, its positive power, and castrate the elements of its death drive. In other words, we must strengthen its power and destroy its aggression.

We call for the expansion of the emancipatory element in Zionism, which came to release the Jew of his chains, and apply it to all inhabitants; in other words, we call to unify these two great national movements, the Jewish and the Palestinian, into one liberating force that will call upon all Jews and Palestinians of the world to come together and build a model society.

We must liberate the local discourse from the ethnic dichotomy that rules it. We must restore the faith in the Revolution that began a hundred years ago, as we are repairing it. We must cleanse Zionism of its nationalistic elements without relinquishing its Messianic fervor for liberty, freedom, and equality.

We must address the religious settler, who fiercely loves his land and feels attached to his home of thirty years, and we must trust his fundamentalist love. We must encourage him to go beyond his own love for the land in order to empathize with the love of the native for his soil, the native who was robbed of it and who was expelled to a refugee camp after three hundred years or more, during which his fathers, grandfathers, and great-grandfathers worked the land with infinite love and dedication. We must call on the religious of both peoples to make use of the faith in the Koran and the Torah, and to share their faith in whoever is made in the image of God, i.e., human, whoever is human.

Filled with faith, we must undertake the transformation of our spiritual geology. Mountains must be moved, and Syrian-African fault lines created anew.

If we are proven wrong and a political solution is soon achieved, we will stand under its flag as one. But for the moment, we will continue to move towards our new place with the perseverance and dedication of diligent builders, and this in order to prevent the collapse of a structure that was built on weak and shaky foundations.

With the help of speech, act, and speech-act, we have to release and strengthen the enjoyment and life-affirming elements from revolutions past, and we must reject the insatiable jouissance of arrogance and covetousness, which is the death drive of past revolutions. The two national liberation movements must come together to create a new place that will cross national boundaries and be a model for the Arab and Western worlds alike.

Together, let us carve an opening in time and space for the Messiah to enter
We’ll recruit him to our cause
And we’ll say Amen 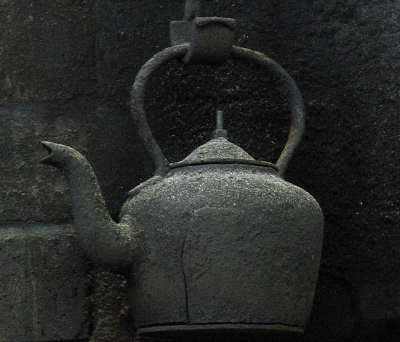 We all remember the old joke about the borrowed kettle which Freud quotes in order to render the strange logic of dreams, namely the enumeration of mutually exclusive answers to a reproach (that I returned to a friend a broken kettle): (1) I never borrowed a kettle from you; (2) I returned it to you unbroken; (3) the kettle was already broken when I got it from you. For Freud, such an enumeration of inconsistent arguments of course confirms per negationem what it endeavors to deny – that I returned you a broken kettle… Now, in June 2003, when, after hundreds of investigators were looking after the WMD, none were found, the answer to the critics who ask the elementary question “If there are no WMD, why then did we attack Iraq? Did you lie to us?”, is structured precisely like the argument about the borrowed kettle: (1) We DID find them (the two mobile labs…); (2) OK, these two labs do not really prove anything, but give us more time, and we will find them, there HAVE to be some WMD in Iraq; (3) even if there are no WMD in Iraq, this was not the only reason we went to war, there are also other good reasons to topple a brutal dictator and aggressor like Saddam.

When a Marxist encounters a bourgeois subject immersed in commodity fetishism, the Marxist’s reproach to him is not “The commodity may seem to you to be a magical object endowed with special powers, but it really is just a reified expression of relations between people” but rather, “You may think that the commodity appears to you as a simple embodiment of social relations (that, for example, money is just a kind of voucher entitling you to a part of the social product), but this is not how things really seem to you. In your social reality, by means of your participation in social exchange, you bear witness to the uncanny fact that a commodity really appears to you as a magical object endowed with special powers.“

So, you think that time is Linear. You think it has a start and an end. That all things are unique, they are born and they die.

And time is indeed Linear. It really is just that. Things are truly unique, unreproducible, eternally singular.

But this is not how things really seem to you.

In your social reality, in your day to day self-reflection, your perception of time is Circular, magical and eternally repeating.

You think that you will have other chances, that things will happen again. That they can return to normal or to that ideal past.

Well, no. Kein Zurück: there is no return, no turning back.

It is not a circle. You can only push forward.

Kein Zurück
Slavoj Žižek – What does it mean to be a revolutionary today? Marxism 2009